The Exodus recumbent motorcycle, by US company Suprine, is a 130-horsepower lay-back motorbike with a roll cage and a perspex windscreen. It's a radical design with a street-legal prototype already in action, and its remarkable form factor allows it to make a fantastic 80-plus miles per gallon on the highway, while looking like something out of a Japanese anime movie.

This is often for good reason. Motorcycles don't appear to be evolving particularly quickly at thispoint, so it's tempting to propose wild new designs, but at the end of the day the standard motorbike as we know it seems to still have an edge over competing ideas when it comes to real-world use and practicality. 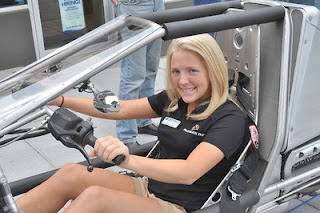 One design that has made it through to a working prototype stage is this one, the Suprine Exodus. Built in Baltimore in the United States, the Exodus is a naked, recumbent motorcycle with a large windshield and a tubular steel spaceframe with a protective roll-cage. 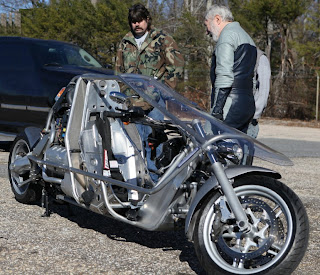 Built around a 1200-cc four-cylinder BMW engine, presumably out of the K1200LT tourer, the Exodus also incorporates the BMW's shaft drive and paralever rear suspension. Front suspension is a pair of raked-out telescopic forks and the gearbox is a five-speed with reverse – which I can imagine would come in very handy. 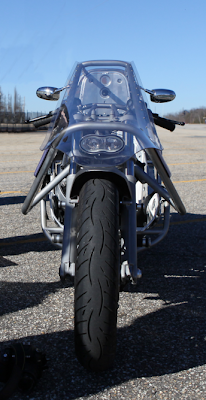 The cockpit features an aluminum racing bucket seat that puts the rider's backside just 7 inches off the ground. Initially, the Exodus is conceived as a bare-bones, naked celebration of engineering, but you can easily envisage it becoming an enclosed riding cabin in future releases. 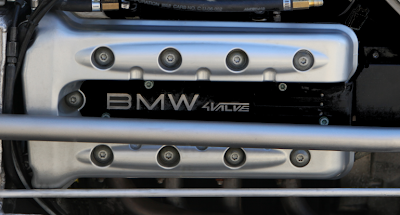 The rider's feet are free to touch the ground and hold the bike upright at the lights, although the seating position looks like it'd make this a bit of a challenge. When it's moving, you pop your feet up onto a set of cruiser-style forward controls and off you go. Parking the bike requires an electrically operated centrestand (there's no side stand) so you've clearly got to pick a good flat spot.
More information at the Suprine website.