Celkon Signature One A107+ full specs

Celkon Mobile, which is recently becoming more popular name in India, has launched one more budget 5 Inch Android phone which is named A107+. Celkon A107+ is priced at Rs 7299/- for those who are budget conscious.Celkon A107+ is 5 Inch Full Touch capacitive touch screen phone, which has resolution of 800 x 480 pixels, so in term of ppi it will come to 187 ppi which is decent. It is powered by 1 GHz dual core processor with 512 MB RAM, in terms of memory it has 4 GB internal memory and further the memory can be expanded to 32 GB with micro SD card. 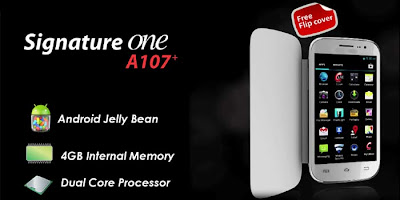 Celkon A107+ has 8 Mega Pixel rear camera with LED flash and on the front it has 1.3 Mega Pixel camera for video calling and chatting. If you look at connectivity options it has GPRS / EDGE, WiFi, Bluetooth and Micro USB.It is backed by 2100 mAh's powerful battery. Celkon A107+ runs on the latest Android 4.2 Jell Bean OS. 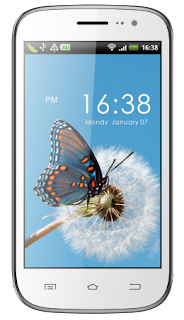