Microsoft to buy Nokia's handset division for US$7.17 billion


Nokia has announced that it will sell "substantially all of its Devices & Services business and license its patents to Microsoft." The €5.44 billion (US$7.17 billion) deal is expected to be finalized in the first quarter of 2014 subject to approval by Nokia shareholders and regulatory approvals.
The deal will see some 32,000 Nokia employees transfer to Microsoft along with Nokia's CEO Stephen Elop and a number of other executives. Elop is seen also as a leading candidate to replace Microsoft CEO Steve Ballmer, who announced two weeks ago that he will step down within 12 months. Risto Siilasmaa will become Nokia's interim CEO. 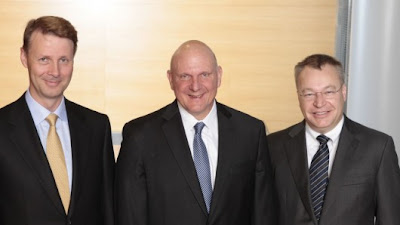 Risto Siilasmaa (left) who will become Nokia's interim CEO, with Steve Ballmer and Stephen Elop (Photo: Nokia)
Nokia has undergone a well documented slide from its market leading position in the mobile phone business in recent years. The two companies already have an established partnership in the smartphone space and, while it's not yet clear exactly what it will translate to at the store-counter, the acquisition is designed to give Microsoft a boost in the mobile device market where Apple and Android OS manufacturers dominate.
And what will become of Nokia? According to the company's statement it will focus on its three established businesses in network infrastructure and services, mapping and location services and technology development and licensing.
Source: Nokia