The 5.5-inch smartphone, which comes with Android 6.0 Marshmallow out of the box, has a Quad HD display with a Fingerprint Sensor. Inside it has a Qualcomm Snapdragon 820 processor, 4GB of RAM and 32GB of on-board storage, along with a microSD card slot that can support up to 2TB of additional storage. It also comes with a 21-megapixel rear camera and an 8-megapixel front-facing camera, along with a 3,000mAh battery. 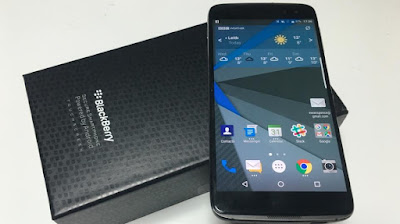 Indeed the phone’s hardware is manufactured by Chinese electronics company TCL Corp, however, it comes with Blackberry’s security software which is known for it.

Notably last month, BlackBerry said it would completely stop designing its phones and instead license out the BlackBerry brand to other manufacturers.

“We’re not restricting ourselves to just phones , there are other segments that are interesting and where both our management capability and our security capability and our software -- which is great -- would be useful” Chief Operating Officer Marty Beard said in an interview.

Dtek60 is available from BlackBerry in Canada, France, Germany, Italy, Netherlands, Spain, UK and US, priced at $499 in US.