Thanks largely to the Connected Car Expo that preceded the start of the auto show itself, current and future car tech was a focal point in LA. Toyota's Driver Awareness Research Vehicle (DAR-V) was one of the most visible examples of this. 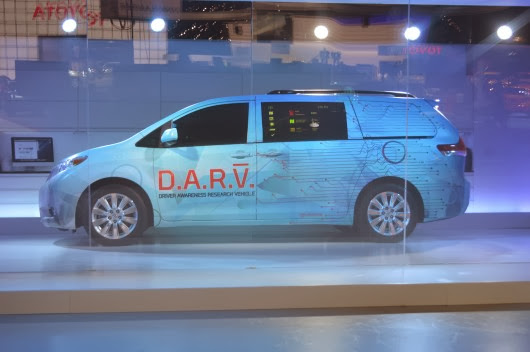 Developed with the help of Microsoft Research, the DAR-V attempts to limit the distractions that drivers face during the commute by providing key information before the driver even gets behind the wheel. With a combination of Kinect-powered gesture control, voice command and key fob activation, a display built into the side window delivers information about traffic, weather, daily schedule and appointments, and navigation. By getting this information ahead of time, the driver will presumably be less distracted while actually driving. 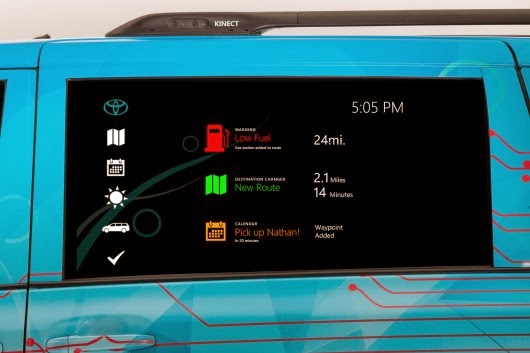 Ford Edge Concept
Another hot LA topic under the greater car-technology banner was automated vehicles. Although self-driving cars remain some years off, experts say that cars will start to take over more and more driving responsibilities over the next few years. In fact, the process is already underway. 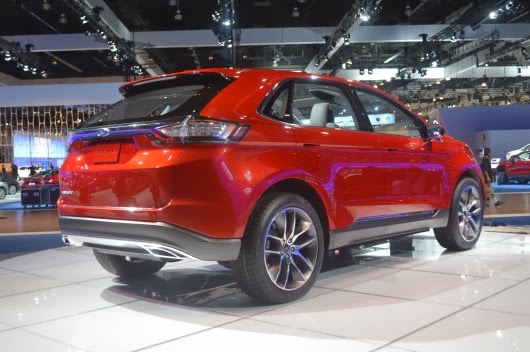 The Ford Edge Concept was designed in part to showcase Ford's latest semi-autonomous capabilities. The prototype "fully assisted parking aid" and its ultrasonic sensors, which can be activated from inside the vehicle or by remote control, allow the Edge Concept to navigate into and out of a parking spot. The Edge Concept also has an obstacle-avoidance system that can sense still and slow-moving objects ahead, send warnings to the driver, and steer or brake if the driver fails to react in time.
Volkswagen CrossBlue Coupe
The CrossBlue Coupe debuted at NAIAS 2013 and also appeared at the 2013 Shanghai auto show. Its most recent stop was in LA, where its specs received a modest update. 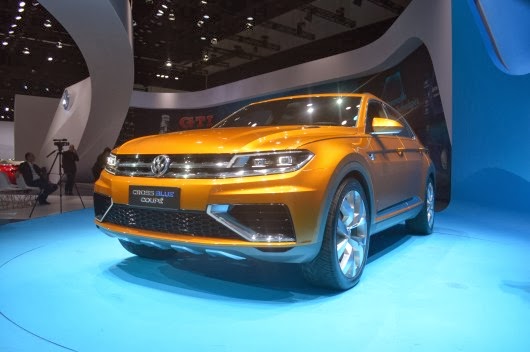 Volkswagen's latest information says that the dual motor + turbo V6-based plug-in hybrid driveline puts out 415 hp, returns up to 70 mpg-e, and travels up to 570 miles (917 km) with a full tank of gas and full battery. That economical performance is underpinned by 13 miles (21 km) of all-electric driving and complemented by a spirited 5.8-second 0-60 mph (96.5 km/h) time and 147-mph (237 km/h) top speed. There is some speculation that LA was a stop on the way toward CrossBlue production, and VW's description of it as a "glimpse at the future" adds a little support to that view.
Mercedes AMG Vision Gran Turismo 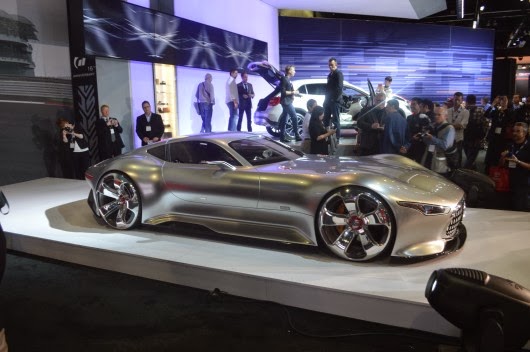 There was one car in LA that called itself a Puma but looked like the absolute opposite of a lithe pussy cat stretching every muscle. The Mercedes-Benz AMG Vision Gran Turismo truly looks the part. It's amazing what designers can come up with when they're not constrained by having to actually build and sell their creation. We won't rehash the story of the 585-hp Gran Turismo concept here, but you can see it from a number of angles in the gallery. 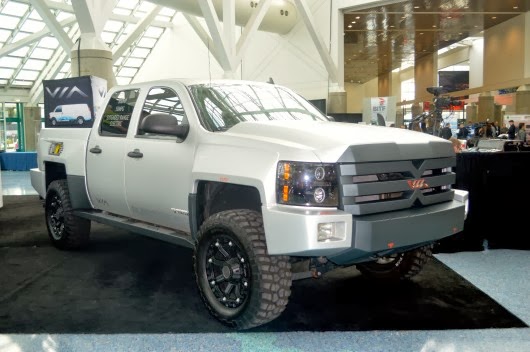 The big announcements from VIA Motors in LA were its solar panel pickup tonneau cover and the start of production on its range-extending truck and van line. But the biggest sight at its booth was the XTrux concept.
Revealed early this year at NAIAS, the 4WD truck packs double the punch of VIA's production trucks, using two 402-hp electric motors for more than 800 hp worth of rippling muscle. Its V8 engine is tasked with range-extending duties, charging the battery pack after about 40 all-electric miles (64 km) or so. VIA estimates that this hybrid combination offers capabilities for 100-mpg averages and also gives drivers immediate access to 738 lb-ft of torque. For a truck that has that much size, power and tech going on, the Xtrux wears very simple, understated styling. 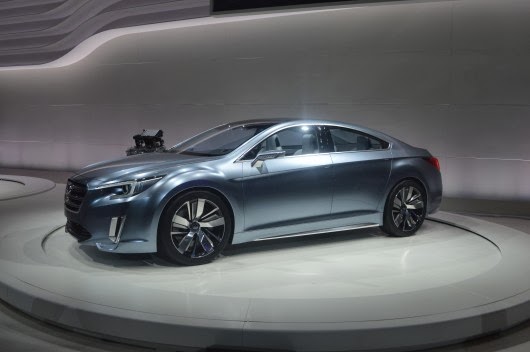 Subaru shows a sportier look for its venerable Legacy sedan with the Legacy Concept that premiered in LA. The concept car hints at what the Legacy would look like as a slick, four-door coupe. The lights, shapes and cuts of the front and rear fascias mirror each other, providing a symmetry that's physically connected by sharp character lines running down the flanks. The concept car is coated with Ocean Silver Metallic paint. It's not clear how much the Legacy Concept will influence the next production model, but we like what we see so far.
1963 Chevy Corvette "Asteroid" 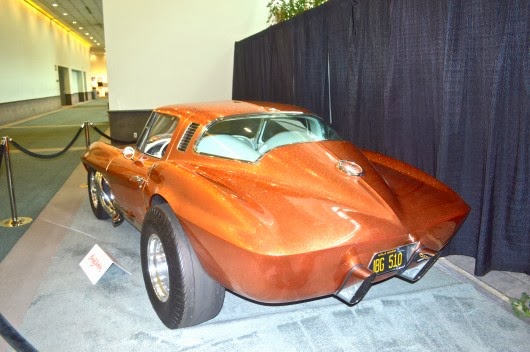 We left this list open to special editions specifically so we'd have an excuse to include this one-of-a-kind 1963 Chevy Corvette Asteroid. The sparkling Stingray was a welcome contrast to the brand-new hardware of the LA show. We're not sure we'd cover a classic Corvette in glittering metallic paint, but this particular model was still new when it was customized by Barris Kustoms. Originally owned by Bob Nordskog, the Asteroid won several show awards and ran a 12.20 in the quarter mile in its heyday. In LA, it served as a very effective advertisement for the upcoming Barrett Jackson Westworld of Scottsdale auction, which starts on January 12.
SRT Viper GTS Anodized Carbon Special Edition 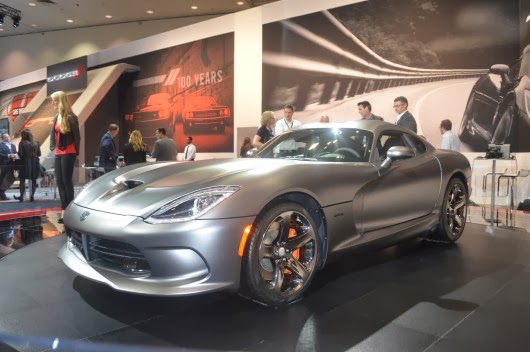 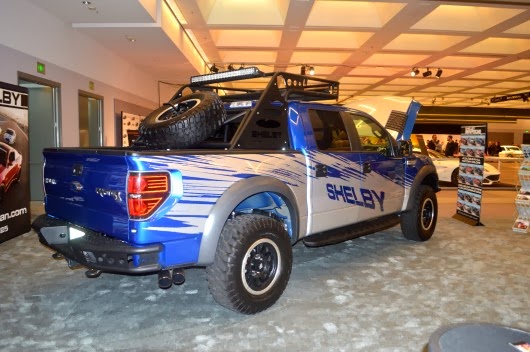 We missed the reveal of the 2013 Shelby Raptor package at the New York Auto Show in March, so we were sure to take our time looking it over in LA. The Ford SVT Raptor is already one of the most rugged, off-road-ready pickup trucks in the world, and the Shelby treatment just warms it up further. With the help of a supercharger, Shelby adds more than 150 horses, dialing the Raptor right up to 575 hp. The US$18,000 package also includes a Shelby exhaust, custom interior, serial numbered badges and graphics package. 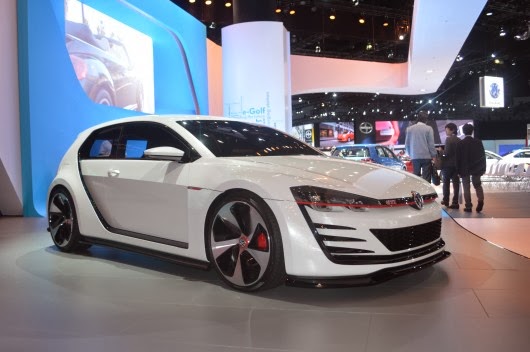 A rather radical GTI makeover, the Design Vision GTI was first revealed at the Wörthersee festival. The slices down its sides look a bit like the side blades on the Audi R8, but they're actually C-pillar extensions designed to extend the body work over widened tracks and 20-inch wheels. Under the hood, a twin-turbo 3.0-liter V6 TSI engine puts out 503 hp – more than double the stock GTI's 230 hp. That power is distributed to all four wheels, ensuring performance just south of "supercar" – 0 to 62 mph (100 km/h) in 3.9 seconds and 186 mph (300 km/h) at the top end. The design is the essence of an exhilarating hot hatch.
That's our pick of the concepts and special editions rolled out at this year's LA Auto Show. Let us know the concepts you'd like to see make the jump to production and those you think should remain concepts.
Source :gizmag